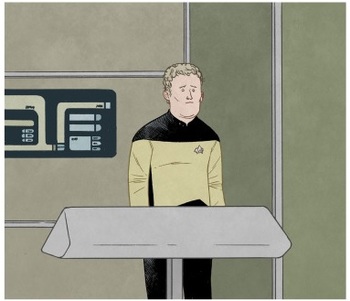 Just another day in the life of Chief O'Brien.

Chief O'Brien at Work is a webcomic created by Jon Adams that focuses on the day-to-day struggles of Star Trek: The Next Generation character Transporter Chief Miles O'Brien. The comic lampoons the Star Trek universe by showcasing just how dull a job like being the ship's transporter chief is compared to the glamorous adventures of the away teams and command crew. It's also not afraid to showcase just how terrible Chief O'Brien's life is.

The webcomic can be viewed here.