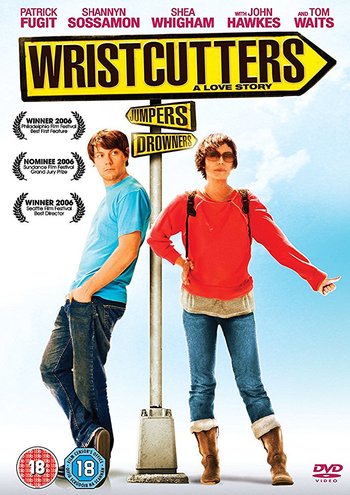 A quietly charming indie film based on Israeli writer Etgar Keret’s novella Kneller’s Happy Campers, Wristcutters: A Love Story follows recent suicide Zia (Patrick Fugit) and his journey through a limbo set aside for those who kill themselves. This world is only slightly different from life, except the color is muted, there are no flowers or stars, and no one can smile. After spending some time in this world, Zia meets Eugene (Shea Whigham), a Russian rock star, and Mikal (Shannyn Sossamon), who claims she didn't kill herself and is trying to get back to the living world. The three of them set off into this depressing dimension in order to find Zia's ex-girlfriend, who has also killed herself, and the People In Charge, who have the power to send Mikal back.

Despite what you think, it's definitely not an emo film.