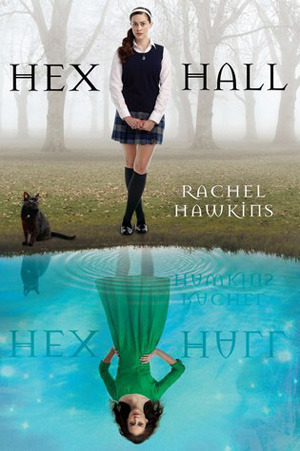 Hex Hall is a trilogy of Young Adult fantasy novels by Rachel Hawkins.

Sophie Mercer discovered that she was a witch when she was twelve years old.Since then her powers have gotten her onto a whole heap of trouble, and when a wayward spell at prom draws attention, Sophie finds herself sent off to a reform school, Hecate Hall, better known as Hex Hall. Hex Hall is filled with all sorts of Prodigium, witches, warlocks, faes, shapeshifters and weres, it's all a bit much for Sophie who was raised by her human mother. Between the fact that Sophie's new roommate Jenna happens to be the only vampire in the school, the obnoxious, annoying, mysterious, totally hot warlock Archer Cross that Sophie couldn't possibly have a crush on, and the strange ghost girl that seems to have taken an interest in Sophie, it's almost enough to forget that there's a series of attacks going on at the school that have already left one girl dead.

In the sequel Demonglass, Sophie travels to England to spend the summer with her estranged father along with Jenna and Cal. They stay at Thorne Abbey, which is acting as The Council headquarters. Sophie is trying to learn what it means to be a demon and control her powers, but is distracted by the fact that someone has been raising demons, a war is brewing between Prodigium and the Eye, her recently discovered betrothal to Cal, and she can't seem to get Archer Cross out of her head.

In Spellbound, just as Sophie Mercer has come to accept her extraordinary magical powers as a demon, the Prodigium Council strips them away. Now Sophie is defenseless, alone, and at the mercy of her sworn enemies—the Brannicks, a family of warrior women who hunt down the Prodigium. Or at least that’s what Sophie thinks, until she makes a surprising discovery. The Brannicks know an epic war is coming, and they believe Sophie is the only one powerful enough to stop the world from ending. But without her magic, Sophie isn’t as confident.

, was published by the author on Tumblr.

In 2013, a spinoff novel titled School Spirits was published.