Film / The House of the Devil 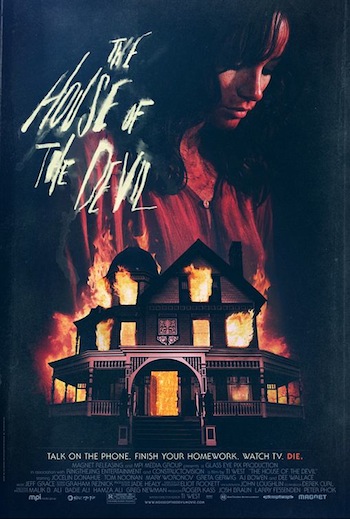 "This one night changes everything for me."
Mrs. Ulman: You're a godsend.
Samantha: It's nothing.
Mrs. Ulman: Not to us, it's not.
Advertisement:

In the 1980s, college student Samantha Hughes (Donahue) rents a small apartment but finds herself struggling to come up with the first month's rent. Out of desperation, she takes a babysitting job that will coincide with a full lunar eclipse, even after several strange interactions with the man who placed the ad.

Upon arriving at the isolated house where the job will take place, which belongs to the Ulman family, mysteries and revelations begin to pile up in increasingly bizarre forms, leading Samantha to the terrifying secret kept by her clients.

The film is notable for its convincing retraux evocation of old '70s and '80s horror movies, mainly from the slasher and Haunted House subgenres. This was achieved in part through the use of filming equipment from the times, such as 16mm film, as well as the emulation of then-standard filming techniques, including camera zooms as opposed to dolly-ins, stylized opening and closing credits, and dramatized claims of its story being based on true events à la The Texas Chain Saw Massacre (1974) and The Amityville Horror (1979).

As this is a film with a plot containing major twists, watch out for spoilers.