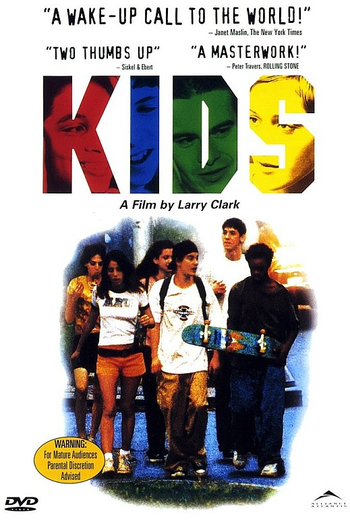 Kids is a 1995 drama film directed by Larry Clark and written by Harmony Korine.

Leo Fitzpatrick and Justin Pierce star as Telly and Casper, two New York teenagers of around 17. Telly's mission in life is to deflower virgins, referring to himself as the "virgin surgeon". His latest sexual conquest has been 13-year-old Jennie (Chloë Sevigny).

The film charts a day in Telly and Casper's lives, as they go about their daily activities of using black slang, smoking pot, shoplifting, beating up a passerby who crosses them in the park, and attending midnight raves, whilst Jennie and her friend Ruby (Rosario Dawson) attempt to track them down and give Telly some information of life-and-death importance.

The film was and is extremely controversial for its frank, unabashed depiction of teen sexuality, deliquency and drug use, initially landing it an NC-17 ratingnote which US Distributor at the time Miramax's parent company, Disney, forbade from releasing films with that rating, so a one-off company was made solely to handle the release of this film. It is notable for using untrained actors actually recruited from the street (this was Sevigny and Dawson's debut).