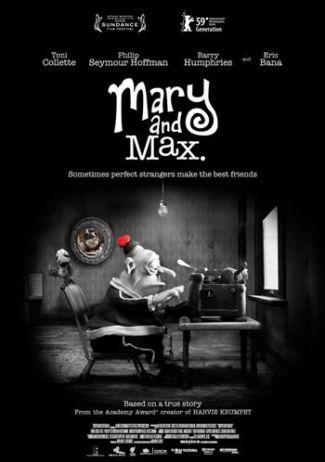 Mary and Max is a 2009 Australian clay-animated Black Comedy-Drama written and directed by Adam Elliot, the Oscar winning director of the short film Harvie Krumpet.

Set in the 1970-90s, Mary and Max tells the story of a friendship between two unlikely pen pals: Mary Daisy Dinkle (Bethany Whitmore for young Mary, Toni Collette for older Mary), a lonely 8-year-old girl living in the suburbs of Melbourne, Australia, and Max Jerry Horowitz (Philip Seymour Hoffman), an obese 44-year old man with Asperger Syndrome living in New York City. The movie follows the story of their life and friendship over the course of Mary's childhood and adulthood. What appears to start out as a solely blackly humourous story soon turns into something quite dark and often very depressing, dealing with everything from parental neglect, to insecurity, to bullying, to suicide.