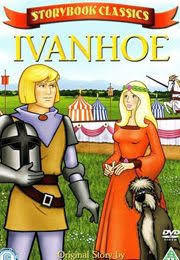 Ivanhoe is the Burbank Films Australia adaptation of the Walter Scott novel. It was released in 1986

Having been exiled from his fathers home, the valiant Ivanhoe joins the Third Crusade and becomes known for his bravery and skill. After saving King Richard's life from a Saracen ambush, Richard offers him the pick of any treasure he desires. However, Ivanhoe has only one request; to return to England and his beloved Rowena, over who's love he was cast out by his father, who hopes to marry her to the Saxon noble Athelstane, and create a new Saxon dynasty. With Richards blessing, Ivanhoe returns to England in secret under the guise of a pilgrim, only to find it under the yoke of Prince John and his Norman supporters, who have put themselves up as tyrants in King Richard's absence. With the help of his old squire Gurth and Isaac of York, who Ivanhoe rescues from bandits, Ivanhoe takes part in Prince John's annual tournament as the Disinherited Knight in his quest to prove himself worthy of Rowena, but soon finds himself drawn into the struggle for the future of England.