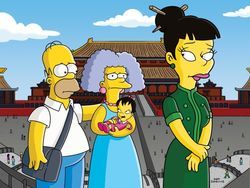 The Simpsons are going to China after Selma is diagnosed with menopause and turns to adoption to make her dream of being a mother come true. However, the Chinese government doesn't allow single women to adopt, so Selma pretends that Homer is her husband and Marge is a single, live-in nanny.