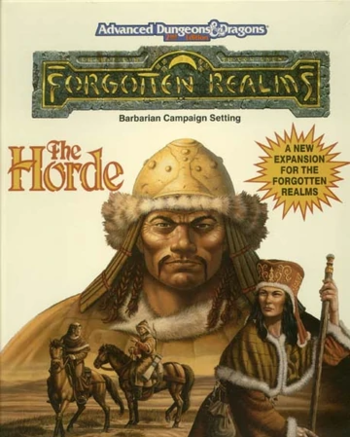 Released in a boxed set titled "The Horde", the Hordelands are a vast and empty region of Faerun, the main continent of Toril, inhabited by myriad tribes of nomadic farmers and hunter-gatherers. This great swathe of cold, arid steppes, deserts, towering peaks, stands of birch forests and swamps, glacial fields and tundra divides the furthest eastern reaches of Faerun, the lands of Thay and Rasheman, from the distant lands of Kara-tur. Despite this, the famous Golden Way, a road that links the great waterholes of the wasteland, serves as an artery for trade between the outflung realms to either side of the Hordelands.

After its initial release, the Hordelands mostly faded into obscurity, warranting little more than passing mention in the Forgotten Realms campaign guides for 3rd and 4th edition.

This setting includes examples of: