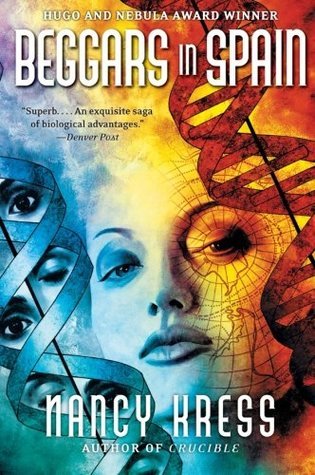 Beggars in Spain is a Nebula Award-winning story by Nancy Kress, released in 1993. (The original novella, corresponding to the first quarter of the novel, won; the expanded version didn't.) It was followed by Beggars And Choosers and Beggars Ride.

It's 2008, 20 Minutes into the Future. Leisha Camden is a Born Winner: her daddy's rich, her mama's good-looking, she's got blonde hair, blue eyes... and the latest genemods, the one that make you not need to sleep. This particular genemod is a very new technology, and Leisha is only the 21st human being ever born with it. The other 19 are healthy, sane, cheerful and incredibly smart; all of them go on to become luminaries in their fields. The 20th was shaken to death by parents who hadn't reckoned on a baby that cried 24/7.

A Cyberpunk novel by way of Genetic Engineering Is the New Nuke, the Beggars trilogy has a lot of technology in it, obviously; in addition to "genemods", as they're called, there's Cold Fusion, invented by a guy named Kenzo Yagai. He also invented Yagaiism, which Kress admits to having based on Objectivism. The particular emphasis of Yagaiism is that all contact should be mutually beneficial: if you don't get anything out of helping someone, it's not just stupid but immoral to do so. Leisha, a devout Yagaiist, agrees with this idea... but isn't always able to square that away with the fact that, if she meets a beggar in Spain, it would be just as wrong not to give him a dollar. Hmm. Does Not Compute.

The other emphasis of the trilogy, the real emphasis, is prejudice. What Measure Is a Non-Human? Every single character in the series is asking this, and what's interesting is that every single character in the series has a different way of defining "human". To most people, the Sleepless—intelligent, overachieving, blessed with superb emotional stability—aren't human... especially when it's discovered that the Sleeplessness gene unlocks some sort of radical Healing Factor, making the Sleepless functionally immortal. To the Sleepless, Muggles aren't human: not because they have to waste a third of their life in comatose nonproductivity, but because they prefer to Wangst and bask in the culture of entitlement rather than apply themselves. With Fantastic Racism flying in both directions, it isn't long before open hostilities and byzantine plans begin to sprout.

And then things go really Off the Rails.

One part Bio Punk, one part X-Men-style discrimination, one part head-spinning moral quandaries. Oh, and a guy who figures out how to manipulate the subjective unconscious and make people dream.