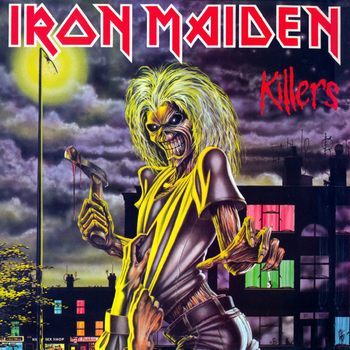 Scream for mercy! He laughs as he's watching you bleed! Killer behind you! His bloodlust defies all his needs!
Advertisement:

Killers is the second studio album by Iron Maiden, released in 1981. It is their first studio album without guitarist Dennis Stratton, who was replaced by Adrian Smith shortly before recording sessions for this album commenced. Smith joining the band effectively led to the forming of what is generally considered to be the most formidable twin guitar team in metal next to Glenn Tipton and K.K. Downing of Judas Priest. It is also their first studio album with producer Martin Birch and the final one with lead vocalist Paul Di'Anno, who would be sacked during the world tour supporting this album, due to his drug abuse and lack of faith in the group's material. He would be replaced by the far more operatic Bruce Dickinson, formerly of Samson (Which was also Clive Burr's former band). He does not receive royalties, not even for his own songs.

Reception of the album has been mixed, some fans preferring it to Iron Maiden, whilst others call it a rather disappointing follow-up in comparison. AllMusic gave it a generally positive review but noted that "the songwriter isn't quite as strong overall as it was on the debut".

Minor hits and fan favourites include "Purgatory", "Twilight Zone", and "Murders In The Rue Morgue", but the only regularly played track is "Wrathchild" which appeared in almost all their concert tours and been covered many times. It was also included in the video game Guitar Hero Encore: Rocks The 80s.

Tracklist note The US version adds "Twilight Zone" as the eighth track, and reissues from 1998 onwards have since moved it down to being the tenth track. The first Australian version of the album adds "Woman In Uniform" as track 8 but doesn't include "Twilight Zone". It was removed from later Australian pressings due to the band not authorizing it being included.: