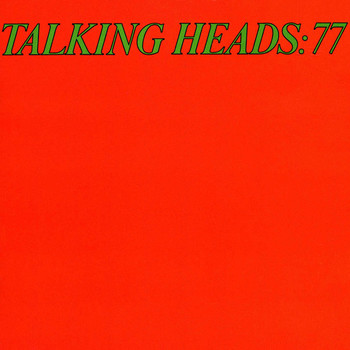 "We are vain and we are blind."
Advertisement:

Talking Heads: 77 is the debut album from Talking Heads. It was released in 1977. The band, formerly a trio of David Byrne (lead vocals, guitar), Tina Weymouth (bass, credited as "Martina Weymouth" on this album) and Chris Frantz (drums), had recently added keyboardist/guitarist Jerry Harrison, formerly of Jonathan Richman's The Modern Lovers. Produced with the intent of differentiating the album from the band's live performances, its unconventional rhythms & lyrics and distinctly anxious-yet-preppy tone immediately set the band apart from other Punk Rock and Post-Punk acts.

Producer Tony Bongiovi worked with The Ramones on Rocket to Russia, released the same year. He and engineer Lance Quinn would become associated with Bon Jovi, the band led by Bongiovi's cousin. The album peaked at no. 97 on the Billboard album charts, while reaching no. 60 on the U.K. chart.

The album was supported by four singles: "Uh-Oh, Love Comes to Town", "Psycho Killer", "Pulled Up", and "New Feeling"; the second-to-last of those was released only in the UK, and the last only in Australia. "Psycho Killer" peaked at no. 92 on the Billboard Hot 100.

The answer is obvious—tropes have come to town!: