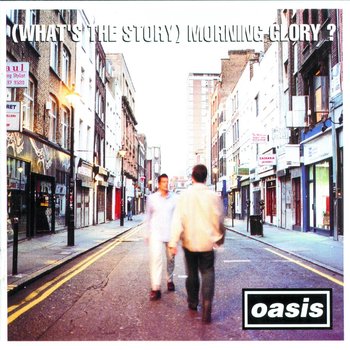 "Another sunny afternoon, walking to the sound of my favorite tune."
Advertisement:

(What's the Story) Morning Glory? is the second studio album by Oasis. It was a smash hit critically and commercially, spawning the hit singles "Roll with It", "Some Might Say", "Champagne Supernova", "Don't Look Back in Anger", "Morning Glory", and "Wonderwall".

After the success of their debut album, Definitely Maybe, the bar was certainly raised high. After being recorded in just 15 days, it was released on October 2, 1995, to such success that it was reported that a copy was sold every two minutes. It has sold over 4.5 million copes in the UK and is currently the fifth-best selling album of all time there.

Alongside Blur's Parklife, Suede's Self-Titled Album and Supergrass's I Should Coco, it has been hailed as a defining album of the Britpop era in British music, ranging from 1992 to 1997.

Followed up by their 1997 album Be Here Now.

"Gonna start a revolution from my bed, 'cause you said the tropes I had went to my head...":