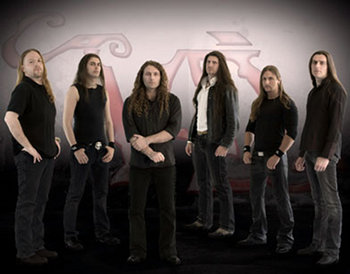 Vision Divine is a Power Metal band from Italy formed in 1998 as a side project of Labyrinth's guitarist Carlo Andrea "Olaf Thorsen" Magnani, which also features Rhapsody of Fire's (in that moment, simply Rhapsody) singer Fabio Lione. The name of the band is composed by the previous name of Labyrinth (Vision) and the supposed name of Olaf's first solo album (Divine). The band had many lineup changes, with Olaf as the only constant member.

The band has examples of: