Music / Music For The Jilted Generation 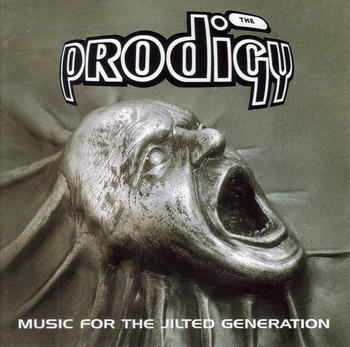 What we're dealing with here is a total lack of respect for the law.
Advertisement:

Music for the Jilted Generation is a 1994 album by The Prodigy. After a creative and successful debut, Experience, Liam Howlett decided to make his work less cartoonish and stop playing around. Gone were the childish samples and colourful melodies. This album was considerably darker than its predecessor. Liam Howlett turned to Industrial; on "Break & Enter" the sound of breaking glass is featured prominently. He also actively used guitar sound on several tracks.

The event which affected Howlett prior to the release of this album was a proposed act of the UK parliament, then under consideration, banning illegal raves. The whole of the rave scene was indignant because it restricted the rights of the youth to have fun and Howlett joined the movement, composing a protest song "Their Law".

This controversy added more depth and legitimacy to the album, albeit on the whole it would hold up without it. The Prodigy at that stage did not need to prove that they could write an album of outstaning material as they had proven it two years before. This release was the first sign of their expansion toward rock which became prominent on its follow-up, The Fat of the Land.

This album earned quite a few accolades in the UK. It ended on a few of top albums of 1994 lists. Spin ranked it number 60 on their "90 Greatest Albums of the '90s" list.