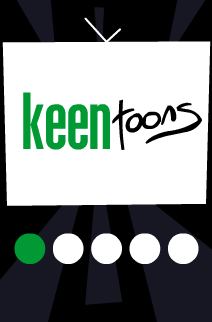 is a site with several web animation series, launched in 2004 after several false starts and mainly active in the two years after that. It is a spinoff of Keenspot.

The cartoons were largely comedy and parody, and several have made reference to, and were presumably influenced by, Homestar Runner. In turn, they have influenced other works, such as GEOWeasel and the former Porplemontage studios cartoons. In addition, their creators have also done work and affectionate parodies between the KeenToons properties.

Cartoons that have been a part of Keen Toons: