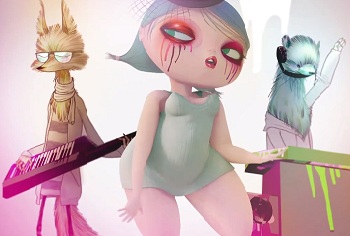 The members: Goldie Foxx, Chubby Cherry, and Dyna Mink.
"Studio Killers. No one knows where they came from; one day they were just here staring back at us through our high definition flat screens."
Advertisement:

Studio Killers is a self-described virtual electronic audio-visual collective based in Denmark, the UK, and Finland. Being virtual, the band is made up entirely of fictional characters portrayed through both animated videos and stunning original artwork. There's the curvaceous vocalist Chubby Cherry, keyboardist canid Goldie Foxx, the dapper DJ Dyna Mink, and their carnivorous manager, Bipolar Bear. Unlike other virtual bands of the same vein, Studio Killers possess a unique quality: no one really knows where they came from or who's behind them.

Another thing that seems to attract is their interaction with their fans. They have official accounts on Facebook, Twitter, Youtube, Soundcloud, and even Tumblr, and speak to their adoring public on all of them. It definitely leads to some interesting questions getting answered sometimes.

Despite only having, at one point, one single, three music videos, one demo, and a number of interviews and sneak-previews, they attracted one large and loyal fanbase made up of art appreciators and music enthusiasts alike. Their first (self-titled) album was released on June 14th, 2013.

A successful Kickstarter campaign in June 2014 funded live shows at Ruisrock and Ilosaarirock festivals in Finland, using multiscreen animated visuals produced with the aid of Immersive Ltd. There are plans to take the live show on tour, but no dates had been announced as of December 2014.

More recently, they have launched a kickstarter for a full animated series

; which culminated with the release of a pilot

on the internet somewhere at some point.