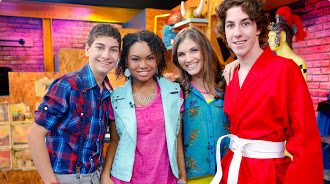 They did it!note From left to right: Noah Grossman, Malika Samuel, Gabrielle "Gabby" Senn, Troy Doherty.
"The following is an important announcement..."

Troy Doherty, Noah Grossman, Malika Samuel, and Gabrielle "Gabby" Senn make random humorous videos and do stunts and skits in between Nickelodeon shows. Additionally, the block interrupts Nickelodeon shows to bring you short, weird gags and jokes that only last a few seconds before returning back to the show.

The block went on hiatus for the summer season and has not returned since, leaving the afternoon programs unhosted.

Example of:
We Interrupt This Program