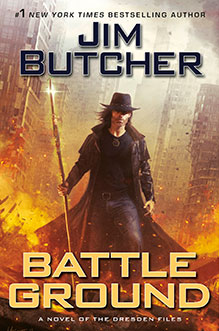 Battle Ground is book #17 in The Dresden Files.

The one where Harry and a whole bunch of others go to war.

Ethniu, daughter of Balor and the last of the Titans, has declared war on Chicago. She leads an army of the Fomor, powerful water-dwelling magicians whose bizarre and twisted magics lend them immense power. Ethniu herself wields the nigh-unstoppable Eye of Balor, which smashed through one of Chicago's most heavily defended magical bases as if it was made of tinfoil. The only obstacle in her path is a loose alliance of disparate magical factions, several of whom care as little for humanity as Ethniu herself, and many of whom were at each other's throats mere days ago.

And one member of that alliance, of course, is Harry Dresden.

Dresden does have a couple of advantages, most notably two superweapons he smuggled out of Hades' vault. But even with those on his side, it will be a tall order indeed for Chicago's only wizard investigator to battle through Ethniu's endless legions and bring her down, especially since some of his strongest allies — the wizards of the White Council, including his own mentor Ebenezar McCoy — no longer fully trust him. And even if he defies the odds once again and succeeds, there's no telling how much — if anything — will remain of Chicago when he's done.

, as was a teaser trailer