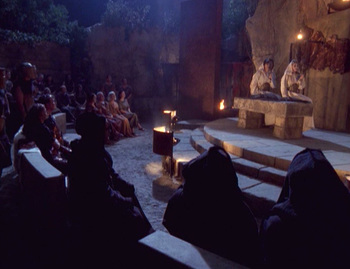 B'Elanna finds herself mixed up with a community theater group, which allows Voyager to get a little meta.
B'Elanna Torres crashes the Delta Flyer on a planet with a Bronze Age civilisation. She is discovered by Kelis, a playwright who mistakes her for a mythical being called an Eternal. Kelis starts writing a play based on her Captain's Log, hoping to woo the proud ruler of his city-state away from war. The two form an awkward alliance, with B'Elanna trying to fix the Flyer and Kelis struggling to write his play.

Not to be confused with the Star Trek: Deep Space Nine episode "The Muse".