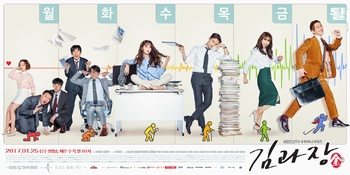 Chief Kim is a 2017 Korean Drama about an small-time crooked accountant Kim Sung-Ryong who initially sets out to bilk a corrupt company of its funds and then flee to Denmark with his spoils. However, once he joins TQ Corporation, he inadvertently finds himself saving the company, making friends and fighting for the basic human rights of employees. It aired on South Korea's KBS network.

Now has a Character Sheet that could use some love!