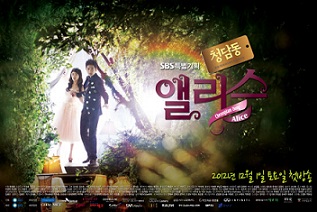 Alice in Cheongdam-dong is a 2012 Korean Drama and a modern retelling of the not-so-fairytale of Alice, where Wonderland has been replaced by the greed and avarice of Cheongdam-dong

Han Se Kyung (dubbed "Han Se") is a bright, young designer, trying to make it in the fashion world. She naively believes that "L'effort est ma force" (Hard work is my strength); that is, effort is the only thing needed to succeed. After a series of events which includes the break-up with longtime boyfriend So In Chan over money and encounters with wacky "Secretary Kim" (who is in reality, Cha Seung Jo), she starts to see reality in a harsher light. Determined to change her fate in life, she decides to find herself a rich man to latch onto. With help from her not-so high school friend Yoon Ju, she tries to move into Cheongdam-dong, a wealthy, fashion neighborhood in Seoul.