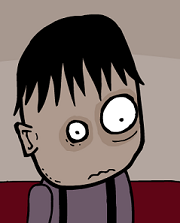 Good beetles, we are.

Spoilsbury Toast Boy is a series of three short flash animations created in 2004 and 2005 by David Firth, the same man who brought us the Mind Screw known as Salad Fingers.

So one can guess what is to be expected from this creation of his.

The series is set in an unidentified (but rather empty) world run mostly by beetles of either normal or human proportions. Toast Boy, the nervous eponymous character, lives with his grandmother and works in a sweat-shop type toast factory with his sister, Liache. One night, the beetles decide that "pleasant thoughts are unhealthy", and burrow into Toast Boy's head through his ear. Then the nightmares and hallucinations begin...

One of David Firth's lesser known works, the series is told from end to beginning as followed: Spoilsbury Toast Boy