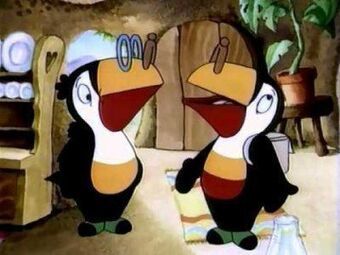 Just two Toucans discussing what to do next.

Toucan Tecs: The Adventures of Zippi & Zac was a British children's television programme about two private detectives, a pair of anthropomorphic toucans named Zippi and Zac who, although based in the jungle, flew around the world solving crimes on their flying devices. Their main enemies were a group of ducks called "The Mad Ducks", led by Red Leader.