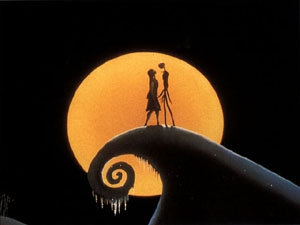 It's the little spiraly design that seems to come up so often in cartoonier media influenced by Goth culture, which itself was heavily inspired by the feel of The Nightmare Before Christmas (pictured). The popularity of this film has influenced an entire generation of young artists with dark proclivities (see DeviantArt) and seems at times so common that one wonders if all one needs to add a bit of gothic appeal to their work is to add a few little spiral designs here and there.