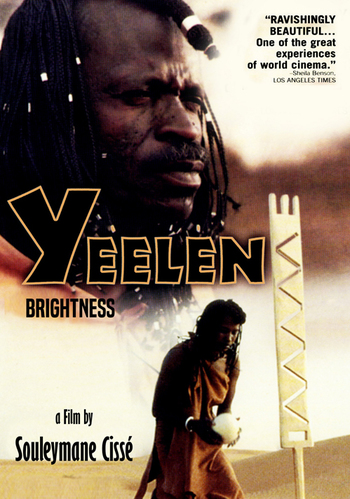 "Niankoro! Your life will be good, your destination happy. Your future is grand, your life, radiant, your death, luminous."

Yeelen (Bambara for "Brightness") is Souleymane Cissé's 1987 classic of Malian cinema. And by "classic," we mean pretty much the only Malian film you're likely to run across in the West. Filmed in the Bambara and Fula languages, it's stunning in terms of visuals, and more than a bit nebulous when it comes to divulging details of setting and plot. While Niankoro, is still in the womb, his father Soma Diarra has a vision that his unborn son will one day kill him. The boy's mother manages to spirit him away and hide him until adulthood, at which point she arms Niankoro with a magic talisman and sends him off to find his uncle, who can hopefully help in the fight against Soma Diarra. Along the way, Niankoro will cast spells, stop battles before they begin, and be betrayed by a part of his own anatomy. The film is based on a Bambara legend, and heavily features depictions of magic.