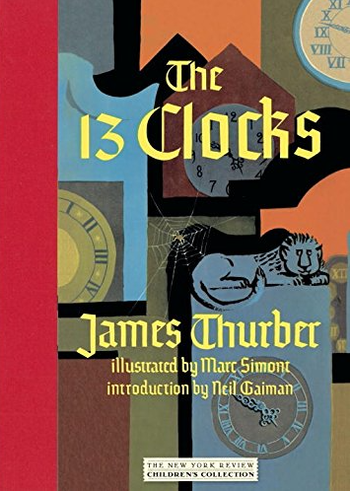 "We all have flaws," [The Duke] said, "and mine is being wicked."
Advertisement:

The 13 Clocks is a fantasy novel by James Thurber. A modern Fairy Tale, recounting the tale of the evil duke who thinks he killed time, in whose castle the 13 clocks never move, and the impossible tasks he sets to those who would marry his niece, the princess.

Full of whimsy and word play. And containing the Golux — the only Golux in the world and not a mere device.

Thurber also wrote three more tales in the same vein, Many Moons, The White Deer and The Wonderful O.

The story is a favorite of Neil Gaiman, who wrote the introduction to the current edition and narrated a short animated film of the first chapter (which can be viewed here