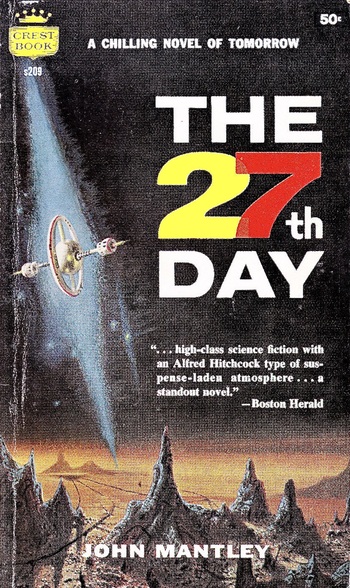 The 27th Day is a 1956 Science Fiction novel by John Mantley.

In the middle of the Cold War, aliens show up and give weapons capable of destroying all life on Earth to five random individuals: an American writer, an English actress, a German scientist, a Russian soldier, and a Chinese peasant. The aliens tell them that if the human race destroys itself with the weapons, they'll take over Earth, however if humanity manages to survive 27 days without unleashing Armageddon upon themselves, the aliens will leave in peace.

The five humans decide to go with the simple solution: don't tell anyone about the boxes. Which would have worked out just fine except that the aliens then make their presence know to the world and tell everyone about the five.

Made into a 1957 film with a screenplay adaptation by Mantley, directed by William Asher and starring Gene Barry, Valerie French, George Voskovec, and Arnold Moss.

The book and movie contain examples of: