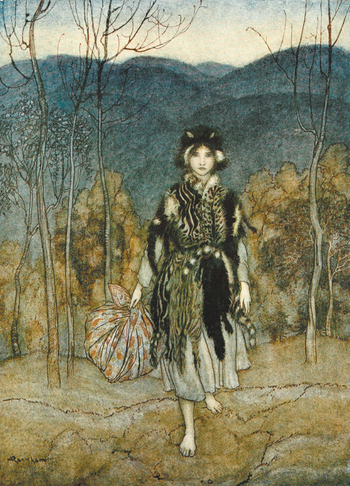 A lord has only one child, a daughter, when he wants a son to inherit his estate. When she's old enough to marry, he orders her married off. She hates the bridegroom, and demands first three fancy dresses, and then a coat of catskin. With it, she runs off, bringing the dresses with her.

She gets a job as a Scullery Maid, and sneaks off to the ball, where she wins the heart of the young lord. The third ball, he manages to track her down and marry her.

Later the cook jeers at her having been so poor. She tells her husband about her father, and her husband tracks him down to find him all alone and wishing he could see his daughter once more, so he brings him home, and he lives with him.

A variant on the persecuted heroine, like Cinderella, though because she is persecuted by a man, classified with those tales, such as "Tattercoats", "Cap o' Rushes", and "Donkeyskin". See also The One-Handed Girl for a different tale type with a male persecutor.