The character sheet for Jade Empire.

The Player Character. Master Li's favorite pupil. Shortly after learning that s/he is the last Spirit Monk, his/her hometown of Two Rivers is destroyed and Master Li is captured. This prompts him/her to go on a journey to find Master Li and learn what his/her destiny is.

There's less Character Customization available for player characters than is usual in BioWare games — instead of using a character creator to modify appearance and change starting stats, players select one out of six or seven (depending on edition) pre-designed characters. The characters start with different fighting styles, but can learn others in the course of gameplay. They have names attached to them (specifically: Furious Ming, Lu the Prodigy, Radiant Jen Zi, Scholar Ling, Tiger Shen, Wu the Lotus Blossom, and Monk Zeng), although players can change these if they like. 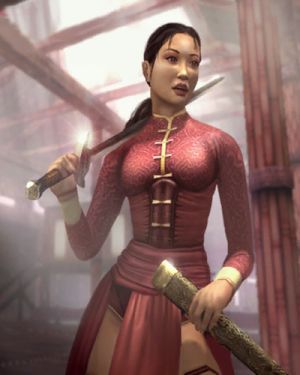 The Spirit Monk's childhood friend. She has the ability to sense spirits that cannot be seen by anyone else. This has led to her being scorned by most of the townsfolk of Two Rivers. She was named after a bright fire that was seen when she was born. A potential love interest for a male Spirit Monk. 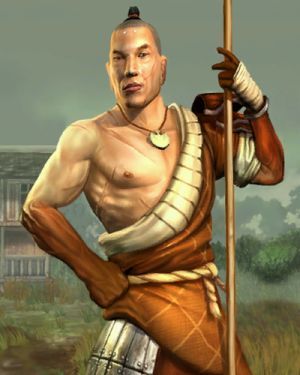 A hermit who the Spirit Monk meets in the swamp outside of Two Rivers. After Two Rivers is destroyed, he admits to being a former Lotus Assassin and agrees to accompany the party for his own reasons. When the party's attempt to infiltrate the Lotus Assassin Fortress fails, he sacrifices himself to kill Death's Hand. He left the Lotus Assassins when he was ordered to kill Master Li's family: he killed Li's wife but spared his newborn daughter, Dawn Star. 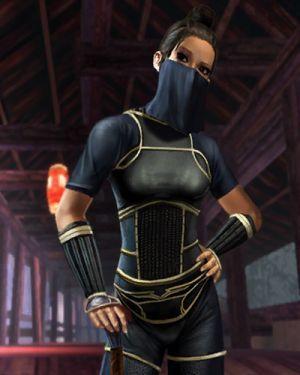 A ninja-like figure who attacks the party after their flier crashes, believing them responsible for the destruction of Two Rivers. She is secretly Princess Sun Lian the Heavenly Lily, the heir to the Empire. She joins the party to prove that her father is being manipulated by Death's Hand. A potential love interest for a Spirit Monk of either gender. 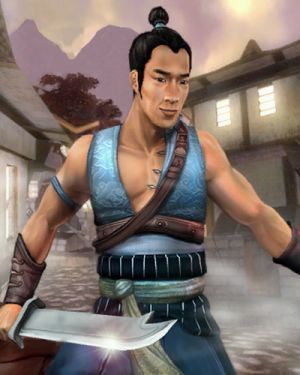 A Lovable Rogue who seeks revenge on the crime lord Gao the Greater for murdering his five-year-old daughter. He joins the party after they beat him to it. A potential love interest for a Spirit Monk of either gender. 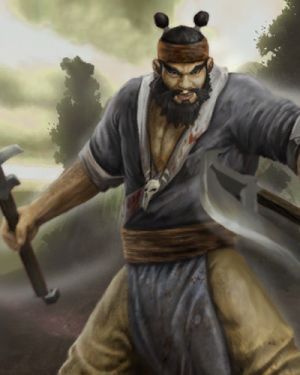 A mercenary who is most famous for storming a fortress while naked, screaming, and drunk. He used to be an arena fighter of some renown, but left when Kai Lan the Serpent's schemes prompted him to accidentally kill his brother. 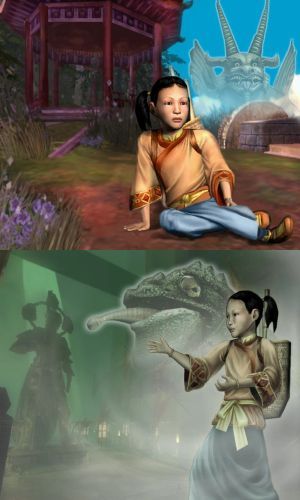 With Chai Ka, top; and with Ya Zhen, below.
Voiced by: Nicky Pugh

A little girl who channels two opposing demons, Chai Ka and Ya Zhen, each of whom is a separate combat/support follower. The two demons only appear in combat, however — the rest of time, Wild Flower will be the one following you.

A benevolent demon that is channeled by Wild Flower. He is often called "The Guardian."

A Toad Demon and Chai Ka's Evil Counterpart. He is trying to forcibly take over Wild Flower. He is often called "The Other." 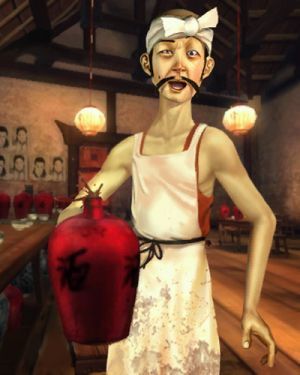 A former Drunken Master who currently works as a cook. While his abusive wife forbids him from drinking and fighting, he is still able to give wine to the Spirit Monk to allow him/her to use the Drunken Master style. 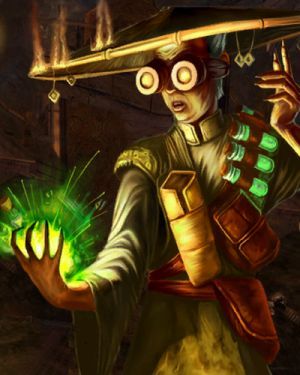 A Mad Scientist forced to develop flyers for Gao the Greater. He eventually decides that he has had enough of Gao's mistreatment and joins the party. He is actually the Inventor God Lord Lao, although he does not remember this.

Kang doesn't join the Spirit Monk in ground-based combat, but is your copilot and mechanic aboard the Marvelous Dragonfly.

A member of the Celestial Bureaucracy. He used to be responsible for determining where people stand on the wheel of life, but his inability to keep up with the actions of the Spirit Monk caused him to be demoted. He decides to sell Essence Gems to the Spirit Monk to prove to his superiors that he is competent.

The ghost of the Abbot of the Temple of Dirge. He has been forced to relive the Battle of Dirge for the last twenty years due to the imprisonment of the Water Dragon. After the Spirit Monk is killed, he explains the truth behind the fall of Dirge. He fights alongside the Spirit Monk until they restore the Water Dragon's power, whereupon he is finally able to rest in peace. 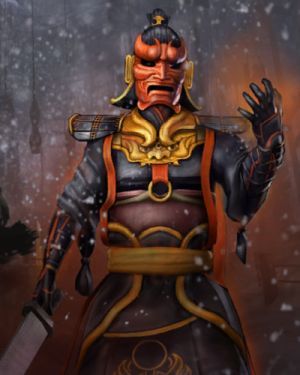 The Big Bad. He leads the Lotus Assassins and is widely believed to be corrupting the Emperor.

Spoilers follow. He used to be Sun Kin the Hand of Heaven, the youngest of the Brothers Sun and former leader of the Order of the Lotus (the precursor to the Lotus Assassins). He was killed by Sun Hai when he tried to commit fratricide himself as Hai was draining the Water Dragon's power. Sun Hai then bound his soul to Master Li's discarded armor. After he is defeated, the Spirit Monk has the opportunity to bind his soul, gaining him as a party member.

A Lotus Assassin agent who is hunting pieces of the Dragon Amulet near Tien's Landing.

A trainer at the Assassins' fortress. The player is assigned as his acolyte while infiltrating the Assassins.

A master assassin and Master Gang's superior at the Assassins' fortress. Gang orders the player to murder him. 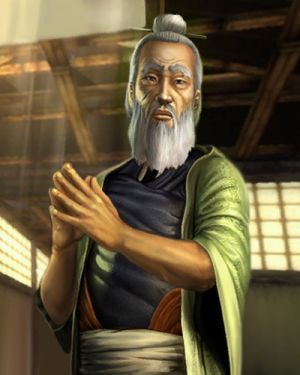 The Master of Two Rivers school, the unofficial mayor of Two Rivers and the Spirit Monk's Master. He reveals early on that he is Sun Li the Glorious Strategist, who betrayed the Emperor by attempting to stop the massacre at Dirge. Shortly afterwords, Two Rivers is burned and he is captured.

Major spoilers follow. He was actually the mastermind behind the massacre at Dirge. He manipulates the Spirit Monk into killing Sun Hai, whereupon he kills him/her and steals the power of the Water Dragon. 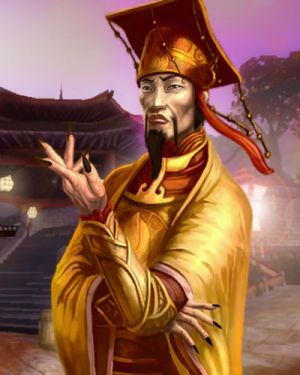 Eldest of the Brothers Sun and ruler of the Jade Empire. He presided over the empire during the Long Drought, which he ended by binding the Water Dragon to his control. Now, problems are plaguing the kingdom, and it is feared that he is ineffectual in the face of Death's Hand's manipulation. In reality, Death's Hand and the Lotus Assassins answer to him and he cares only for his own power.

The Goddess who is responsible for seeing that souls are able to pass between this world and the next. She was killed at the Battle of Dirge, but her spirit appears to provide guidance to the Spirit Monk. Because of her nature, neither her spirit nor her body are quite dead. Sun Hai took her body to his palace and used it to end the Great Drought with the water that she bleeds. It also serves as a grisly trophy and allows Sun Hai to absorb her power as the life slowly drains from her. Her goal is to have the Spirit Monk Mercy Kill her so that she can be reborn.

One of Master Li's strongest students at Two Rivers, but has a terrible attitude and dabbles in dark magic.

A crime boss controlling a group of pirates and slavers, allied with the Lotus Assassins.

Former champion of the Imperial Arena. He is now a high ranking member of the Guild who uses his influence to rig the Arena matches for his own profit.

The current champion of the Imperial Arena known for his brutal strength, refusal to speak and perpetual habit of wearing a mask. He's actually the cover identity of his "predecessor", Raging Ox, the Black Whirlwind's younger brother. He became Kai Lan's henchman while ascending to championship and was accidentally killed by his brother while defending Kai Lan from the latter. He was then revived as a powerful yet mindless minion.

Outlandernote Fantasy Counterpart Culture of the British Empire, although Roderick wears typical Conquistador armor explorer and adventurer that has decided to 'educate' the Jade Empire after being shipwrecked there.

The guardian spirit of the Great Southern Forest, and a Fox Spirit. For some reason she has been killing people from the Pilgrim's Rest Inn, and the Innkeeper is willing to pay half a year's worth of taxes for her to die. It turns out that she bound the demon known as "The Mother", which is corrupting the inn people to cannibalism, centuries ago and now seeks the Spirit Monk's help in defeating her once and for all.

A grotesque demon that serves as a primal force of an ancient hunger as well as the Forest Shadow's balancing counterpart in the Great Southern Forest. She turns men into cannibals, her man-eating minions. She's been trapped for millennia, but the increased number of ghosts has woken her up.