The various characters of Bravest Warriors.

Warning: Spoilers for "Aeon Worm" will be unmarked in the "Paralysed Horse" and "Ralph Waldo Pickle Chips" folders.

The main protagonist of the series, Chris Kirkman is The Bravest Warriors' good-natured and courageous, if sometimes just a bit too emotional, leader. The kindest of the four members, he has a crush on his best friend Beth, although he Cannot Spit It Out no matter how hard he tries. His sticker pet is a bumblebee. In "Lavarinth", it's revealed that Chris will eventually grow up to be The Emotion Lord, an Emotion Lord with exceptional, if somewhat confusing powers. "Ultra Wankershim" indicates that he may not always be with Beth in the future. His powers continue to develop throughout the season, being partially awakened in "Cereal Master".

His character is expanded upon greatly throughout Season 2: He is destined to share a life-changing kiss with Beth in "Merewif Tag", signalling the start of their relationship. However, this is ruined when he spends time with Plum and eventually kisses her instead, missing his date with Beth and the beginning of their relationship. These events are what gradually turns Chris into the Emotion Lord. In "The Parasox Pub", Chris meets a group of his future selves, and due to his inability to kill an innocent emotion lord named Puddingtown, he cuts off the last available path for his future, meaning he is trapped into the one where Danny marries Beth and Chris ends up alone and insane. However, at the end of the episode, Chris opens up a whole new path through the timeline, possibly giving him, and by extension, The Emotion Lord, a second chance with Beth.

The slightly spacey, yet quite intelligent, member of the Bravest Warriors. 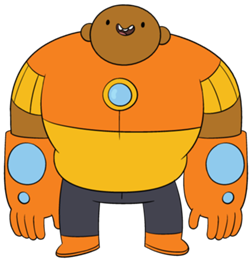 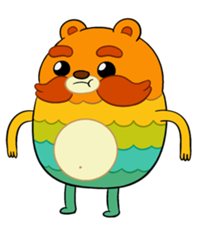 A rainbow colored bear with a mustache and one of Wallow's pets.

Voiced by Sam Lavagnino
"You're my friends now. We're having soft tacos later." 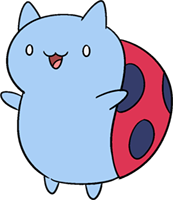 A cross between a cat and a ladybug that lives with the Bravest Warriors. Go here for his self-demonstrating page.

Catbug's Soap Within a Show characters. Sir Jeffers is a stick, Rebecca is a potato, and Chad is a dead rat. 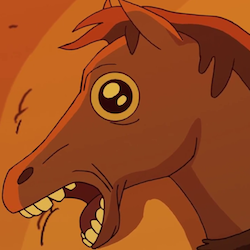 Beth's childhood horse who has been paralysed since he discovered the meaning of the universe at least 10 years ago. He appears at the end of the episode "Catbug". In "Aeon Worm", he and Beth enter the See-Through Zone and finds himself finally able to speak aloud to Beth and move through telekinesis. Eventually, however, he pulls a Heroic Sacrifice to allow Beth to escape the See-Through Zone.

However, in "Season of the Mitch", he is revealed to still be alive, and possesses Hamster Mitch to save Beth from Ralph Waldo Pickle Chips. He is shown again, back in his own body, at the end of the episode. 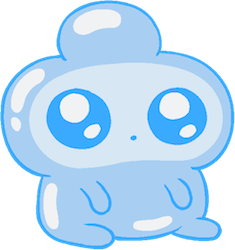 A mysterious being made of jelly that creates toast. Danny befriends him during a period of amnesia, but he escapes through the window by the end of that episode. He isn't seen again until "Mexican Touchdown", where Danny rescues him from the intergalactic pound. After his death in "Jelly Kid Forever", he was resurrected and left the group.

Friends, Allies and Other Peeps

Voiced by Breehn Burns
"If you kids don't want my help, I'll just take my good looks and my country pork rinds back to the bus stop! Pretend I was never here!" 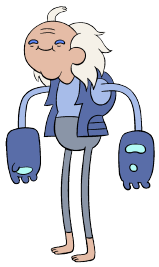 A crazy old man who, as is typical for an Emotion Lord, can bend time and space to his will. He's actually a 200-year old Chris from the future.

A merewif who lives in the lake surrounding the Warriors' invisible base and their closest friend.

Voiced by Maria Bamford
The A.I. in Wallow's glove, who's not at all fond of anyone who isn't Wallow.
The Concierge

Voiced by: Eric Bauza
A strange little merewif who constantly follows the Emotion Lord around, always appearing in a doorway of light with a large book.
Himmel Mancheese

A genderless jellyfish like creature who is initially a friend of the Emotion Lord. Almost immediately after his first encounter, he and Wallow become fast friends, and he soon hangs around the Bravest Warriors as a supporting cast member.
Peach

Voiced by N/A
A mechanic from a distant planet who's currently exclusive to the comics. A scientist who's a fan of the warriors and gets her chance to to help them when they come to help her world with a swarm of monsters hatched from an egg given to her people as a peace offering from their longtime invaders. Enters a relationship with Plum.
Courageous Battlers 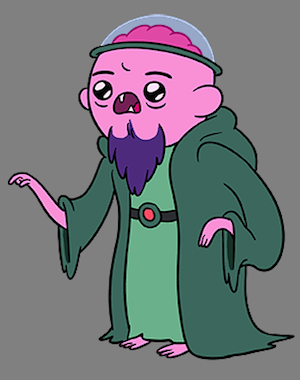 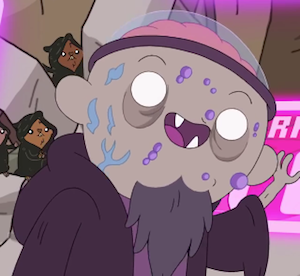 to see him in "Season of the Mitch"

A worshipper of the Aeon Worm and a man mysteriously referred to in the note Beth received from the Seethrough Zone. He turns out to be Beth's father and the original leader of the Courageous Battlers. He sealed the Aeon Worm, along with countless other villains, in the See-Though Zone to begin with, but since then, he has fallen prey to the brainwashing of the Aeon Worm and becomes a mindless devotee.

In "Hamster Priest", despite being locked up by Beth and the Bravest Warriors, he is revealed to be the Big Bad of Season 2, and has been brainwashing hamsters into joining his cult. He eventually faces off with Beth, Wallow and Danny in "Season of the Mitch", having created an army of hamsters and now with the Aeon Worm as his sticker pet. He is eventually defeated by Danny smashing apart the dome over his head with a stick.

Keep in mind that the spoilers below may be from the comics as well as the web series.

Voiced by Tony Todd
A horrifying Eldritch Abomination that was imprisoned in the See-Though Zone. Ralph Waldo Pickle Chips is currently trying to free it. It tried to escape at the end of "Aeon Worm", but was held back by The Paralysed Horse. Becomes Ralph Waldo Pickle Chips's sticker pet in "Season of the Mitch", but is ultimately stopped by the gang.
The Parasite

Voiced by Dana Snyder
An insane gigantic alien who can take control of other people's bodies.
Sadness
A god of unhappiness on a distant planet of Sad Clowns who, due to being perpetually depressed, has forgotten what sadness means. She resembles a blue humanoid but in reality this form is entirely a projection of her power. Her true form resembles a decayed celery stalk.
Pudding Town
The warden of the Parasoxs Pub and an Emotion Lord.