Webcomic / A Tale of Two Rulers 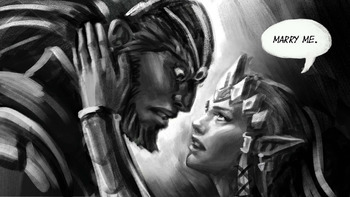 It was the last thing he ever expected her to say.
Advertisement:

A Tale of Two Rulers

is a fanfiction webcomic created by Fig set in The Legend of Zelda universe with a unusual pairing set up as the premise. Once more, Ganondorf has raised his army to conquer the land of Hyrule. Zelda arranges a private meeting with him shortly before this great war would start at her request with a proposal.

Zelda has come to realize that the constant reincarnations and the cycles of battle have devastated Hyrule needlessly and Ganondorf has always failed to succeed in his goals due to the eventual rise of the Hero of Legend. So instead, to avoid all the needless bloodshed and suffering, she's willing to share Hyrule with Ganondorf equally via a royal marriage.

Needless to say, this proposal stuns even the great king of evil. But is he really the same Ganondorf fans of the series know him for? And just where is Link in all this?

What follows is a comic involving the intricacies of palace life, various plots from both sides for advantages that even involve assassination attempts, dark pasts revealed and much broken furniture.

A good chunk of the comic has also been dubbed

and uploaded onto YouTube with Fig's blessing and personal appreciation.

A Tale of Two Rulers provides examples of: