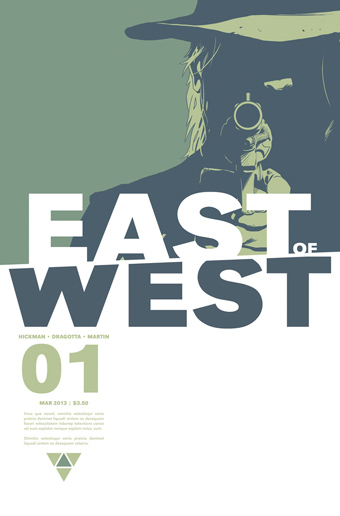 "You have earned what's coming to you."
"If you find hell lonely, wait! Company is comin' soon!"
— Death
Advertisement:

East of West is Jonathan Hickman's and Nick Dragotta's sprawling Alternate History Weird West, sci-fi, fantasy epic published by Image Comics. In the midst of the American Civil War that has dragged on for more than twenty years, a Southern soldier, a Native American chieftain, and an exiled politician from China record three separate parts of the Message, a prophecy foretelling the upcoming End Times. The War is then ended by a massive meteor strike in the desert, the site at which an armistice is signed.

Now, in the future (the series starts in 2064), the United States is anything but united. It is divided into the constantly warring Union, the Confederacy, the Kingdom of New Orleans, the People's Republic of America (formerly California), the Texas Republic, and the Endless Nation. The apocalypse approaches quickly as leading members of each nation have secretly formed a cabal of the Chosen, a group who works to bring about the end times. Meanwhile the Four Horsemen walk the earth and gather power. But one single man stands in the way of the Chosen, one who should be at their helm: the horseman Death. Betrayed by his brethren, Death is on a quest for vengeance. Something of value has been stolen from him and nothing will stand in his way to get it back.

Believe it or not, the above is a much simplified summary which is mainly laid out in the first issue. Hickman's dark, esoteric world only becomes stranger and more interesting as the huge cast of characters interact and struggle for power. But perhaps what makes East of West most memorable is the beautiful and unusual art by Nick Dragotta. With slick action, creative character designs, and a style that is wholly unique, the comic is a sight to behold. After its premier East of West has garnered plenty of praise and favorable comparisons to Hickman's other Image comic The Manhattan Projects.