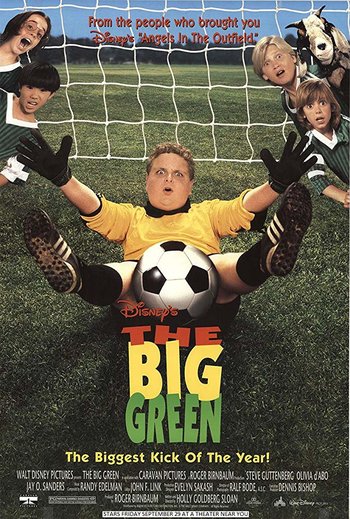 The Big Green is a 1995 live action sports movie from Disney, starring Olivia d'Abo as Anna Montgomery, a teacher who had been transfered from London, England to the incredibly sleepy little (fictional) town of Elma, Texas, a town so small, there's only one school, and the school is divided into two classes - little kids and big kids.

Miss Montgomery is assigned to teach the big kids, but soon learns that the kids have no interest whatsoever in anything, because they feel they're losers. Miss Montgomery decides to try and get the kids involved in an activity that will help boost their confidence, as well as bring them together, so she forms a soccer team with them. Aided by local town Deputy Sheriff Tom Palmer (Steve Guttenberg), who has a crush on her, Miss Montgomery and Deputy Tom try to whip the new team into shape, and sign them up in the junior soccer league, pitting them against top contenders and current state champions, the Austin Knights, coached by Jay Hoffer (Jay O. Sanders).

The Big Green, as they're later called (it's what the old school yard used to be called), fails to win any game, until new student Juan Morales, from El Paso, is enrolled in school, and they see he's a natural at soccer. With Juan on the team, as well as the continued efforts by Miss Montgomery and Deputy Tom to coach them along, the kids slowly but surely build up their confidence, and soon it spreads throughout the town, sparking a new interest in soccer, and giving the townsfolk something to look forward to. Suffice to say in the end, Miss Montgomery definitely made a lasting impact on the town of Elma.