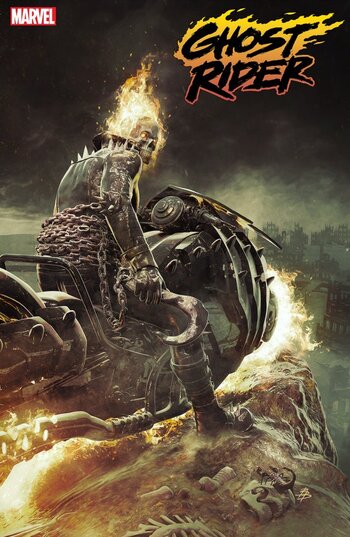 Ghost Rider (2022) is a Superhero Horror series from Marvel Comics, written by Benjamin Percy and illustrated by Cory Smith, with colors by Bryan Valenza. It’s the tenth volume of the Ghost Rider’s solo series, launched to mark the character’s 50th anniversary, and stars Johnny Blaze, the original Ghost Rider.

He runs a repair shop with his father-in-law, 'Crash' Simpson, a man who died when Blaze first became the Ghost Rider. He’s married to Roxanne and they have kids, Craig and Emma. But Roxanne and her children died a while ago... didn't they?

Johnny's living the small-town American Dream. Except that it’s often closer to a nightmare. And that it's all beginning to unravel. The Ghost Rider's still needed - and the Ghost Rider is coming back.

The first issue was released 23 February 2022 to critical acclaim.

WARNING: Spoilers in each issue will be unmarked, so proceed with caution.