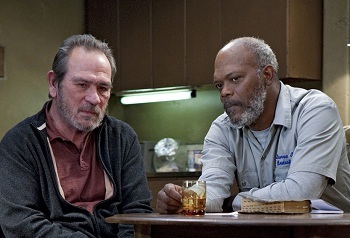 I dont regard my state of mind as some pessimistic view of the world. I regard it as the world itself.
White: Maybe it's not logical. I don't know. I don't care. I've been asked: didn't I think it odd that I should be around to witness the death of everything and I do think it's odd, but that doesn't mean it isn't so. Somebody has to be here.
Black: But you don't intend to hang around for it?
White: No I don't.

The Sunset Limited is a 2011 television film based on the play written by Cormac McCarthy. The film stars Tommy Lee Jones and Samuel L. Jackson.

The film involves only two nameless characters, designated "White" (played by Tommy Lee Jones) and "Black" (played by Samuel L. Jackson), their respective races. Just before this film begins, Black saves White from throwing himself in front of a train. The title "The Sunset Limited" is derived from the name of a passenger train that travels from New Orleans to Los Angeles. All of the action takes place in Black's sparse apartment, where the characters talk after their encounter on the platform. Black is an ex-convict and an evangelical Christian. White is an atheist and a professor. They debate the meaning of human suffering, the existence of God, and the propriety of White's attempted suicide.