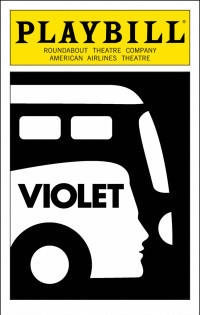 Violet is a 1997 musical developed by Jeanine Tesori (music) and Brian Crawley (lyrics/book), based on the short story "The Ugliest Pilgrim" by Doris Betts. Lauren Ward originated the title role. Violet won the Drama Critics' Circle Award and Lucille Lortel Award as Best Musical. The revised 2014 Broadway production starred Sutton Foster as Violet. The musical follows the bus trip of a young disfigured woman, as she leaves her family's farm in Spruce Pine, North Carolina, seeking healing from a televangelist in Tulsa, Oklahoma.
Advertisement:

Previously to being made into a musical, Doris Betts's short story was adapted into a 1981 short film, also called Violet. Not to be confused with the video game by the same name.