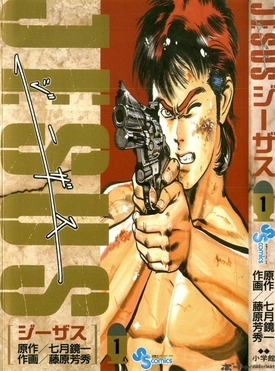 Jesus is a 1990s Shonen manga, that later came to include a 2000-2004 crossover with Yami No Aegis, and a 2009-present crossover with Until Death Do Us Part, as well as its own sequel.

Jesus is a world-renowned assassin, feared by many a Mook and wanted by almost every government organization out there. One day, he gets the bright idea to steal one ton of heroin from a Yakuza group, fake his own death, skip town and then profit from the stolen drugs. However, he soon hits a snag in his plan, and things go from bad to worse. His fake visa isn’t ready for him to leave the country yet, the body double they used is a high school history teacher, and to top it all off, the drugs get sealed inside a reinforced blackboard, and hung up in the very school his body double worked at.

And so begins the tale of how Jesus became an assassin-turned-history teacher. The manga, crossovers and sequel all follow Jesus as he adapts to a "normal" life, all whilst keeping his real identity a secret, and protecting numerous innocents from all of the enemies after him.

Not to be confused with...well...y'know...the religious figure.