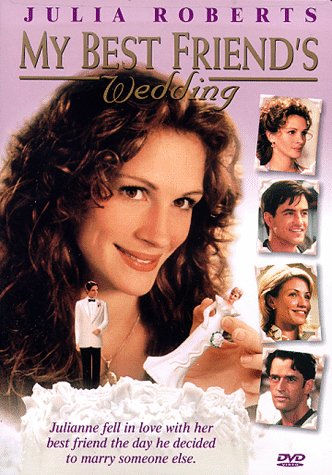 Julianne Potter (Roberts) is a restaurant critic from New York who, turning 28, realizes she's getting dangerously close to being a stale Old Maid. In college she and her best friend, Michael O' Neal (Dermot Mulroney), had made a pact that the two of them would marry each other if neither of them were married by the time they reached 28. He calls close to her birthday... only to tell her that he's found a pretty, wealthy, cheerful young bride in the person of Kimberly Wallace (Diaz), who wants her to be her maid of honor. A Green-Eyed Epiphany follows. She heads to Chicago, to not only be said maid of honor, but also try and sabotage the wedding and get Michael for herself. Hilarity Ensues.

The film opened, embarrassingly, behind Batman & Robin in theaters, but went on to make nearly $300 million at the box office. It also received mostly positive reviews.