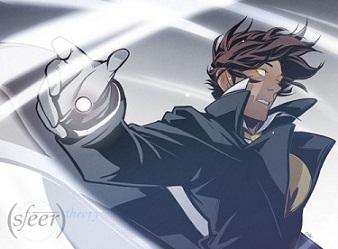 "Sfeer Theory" is the biography of a semi-immortal wizard named Balzac whose duty is to uphold and guard an empire, by way of a magical version of Atlas. The Uitspan Era addresses the beginning of his livelihood, and the Uitspan Age addresses the possible end of it.
— Premise on the About page
Advertisement:

is a fantasy/ steampunk webcomic written by Muun (Alex Singer) with art by Chira (Jayd Aït-Kaci) which updates once a week. The story is split into two storylines, Uitspan Era and Uitspan Age, with only Era updating as of this writing. Age was considered the original story with Era as a prequel, but fate conspired to have Era be created first.

Uitspan Era focuses on Luca Valentino, a Sevallese immigrant of modest birth living in the Warassa Empire. He aspires to study sfeer theory, but the closest he can get to studying at the prestigious Uitspan University is to be employed there as a lowly lab technician. He works there unnoticed for two years until Tomias (a.k.a. Balzac), one of the cyclists at the school, walks in on him performing a complex spell to clean up a wrecked lab. Hilarity Ensues.

The main character of Uitspan Age, as well as the character who started the comic, is Jahn van Heyden. He's the guy you see in the title bars who is not Luca. His story will take place about four hundred years after Era. As a young boy, he and his two younger brothers, all powerful cyclists, are taken in and mentored by the semi-immortal wizard known only as Balzac.

The main character of Sfeer Theory as a whole is technically Tomias/ Balzac, but his story is told through the eyes of Luca and Jahn in Era and Age respectively.

At heart, Sfeer Theory seems to be shaping up into a politically-charged war story, only with magic. The comic is still in its early stages, but since Muun and Chira did a lot of their brainstorming in a LiveJournal community, some readers know a lot more about the characters and setting than can be found in the comic thus far, though information on the plot itself has remained more guarded.

Also, a separate section for examples from Sfeer Theory as a whole should be made, but since we won't really know what's exclusive to Era until Age comes out, the current format for this page is just split between Era and Age. If you know better, feel free to contribute.

An Important Note: A lot of info that we have on the series is brainstorming meta, which is subject to change. If something appears in the comic that contradicts the meta, the comic wins out. Please don't clog the canon tropes with What Could Have Been if this happens. (Add a What Could Have Been tab, or failing that, just list it as a trope and keep the debunked meta there, instead of spreading it all over the page.)