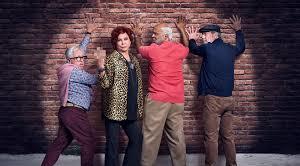 The Cool Kids is an American comedy series about four seniors at a retirement community called Shady Meadows. It began airing in September 2018 and concluded in May 2019.

After their friend Jerry dies, a trio of men meet the newest resident: a rebellious woman in her mid-60s named Margaret.

Canceled after one season.

The Cool Kids provides examples of:

Man at airport: Where is gate number 5?
Hank: It's between gate 4 and gate 6 Genius!