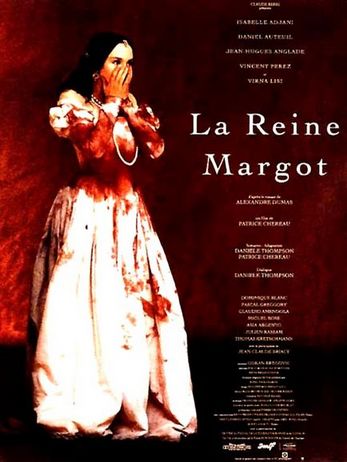 It was the king's favorite dress.
Advertisement:

La Reine Margot is a film adaptation of the novel of the same name by Alexandre Dumas, père. Released in 1994, the film stars Isabelle Adjani as Margot, Vincent Perez as her lover La Môle, and Daniel Auteuil as Henri de Bourbon, the king of Navarre. Originally clocking in at roughly 160 minutes, the film was cut by twenty or so minutes for its international release because of disappointing performance at the box-office in France and criticism that the film was too violent and incoherent. In addition to cuts, changes included a scene of Margot and La Môle wrapped in a red cloth for the American release.

France, 1572. Unrest between Catholics and Protestants is coming to a head. In an effort to restore some semblance of peace, the dowager queen Catherine, the real power behind King Charles IX, arranges a marriage between her daughter, Marguerite de Valois, and the Protestant Henri de Bourbon, King of Navarre. People gather from all over the country to attend the wedding, including several thousand Protestants. One of them being a young man by the name of La Môle who has business with Admiral de Coligny, the king's current favorite.

Naturally, no mere marriage can solve the larger political problems in France, from religious disagreements to a potential war with Spain that Coligny is pushing for, and what's more, Catherine knows that her days in power might be over. The only way to resolve all these issues, so she believes, is to start picking off Protestant leaders.

Until the king says to kill them all.