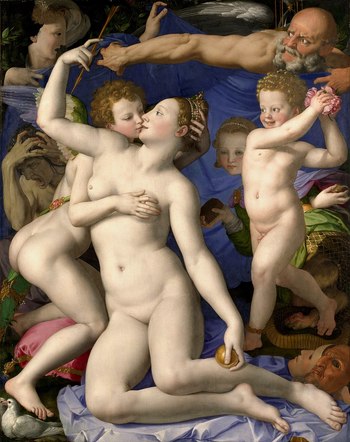 Venus, Cupid, Folly and Time (also called An Allegory of Venus and Cupid and A Triumph of Venus) is an allegorical painting of about 1545 by the Florentine painter Agnolo Bronzino.

The painting has come to be known as Venus, Cupid, Folly and Time, and it is generally agreed that these are the principal figures (with "Folly" representing this or the personification of a similar concept). Cupid and Venus kiss in the foreground, while the putto Folly prepares to shower them with rose petals. The bald Time, at the top, looks on and holds a cloth. The meaning of the other three figures and the interactions between them all is much less certain. The painting displays the ambivalence, eroticism, and obscure imagery that are characteristic of the Mannerist period, and of Bronzino's master Pontormo.

Fans of British television will also recognize the painting as the source of Monty Python's iconic Giant Foot of Stomping, debuting in the title sequence of Monty Python's Flying Circus and becoming an emblem of the troupe in the ensuing decades. The foot specifically belongs to Cupid, and can be seen in the lower-left corner of the painting.

It is currently on display in the National Gallery, London.

Alternative Title(s): An Allegory Of Venus And Cupid, A Triumph Of Venus