Film / Quest of the Delta Knights 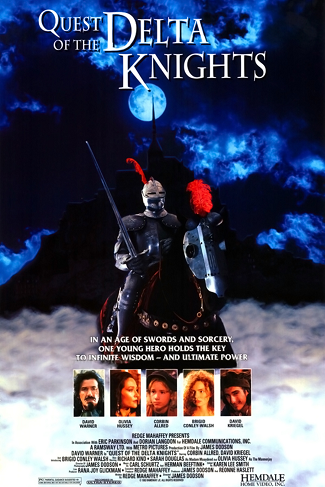 Quest of the Delta Knights is a 1993 Direct to Video fantasy/adventure sword and sorcery film wholly lacking in sorcery. It's another one of those movies that wouldn't have a page on this wiki were it not for Mystery Science Theater 3000 and its Season 9 appearance.

The plot concerns a young boy named Travis (nicknamed "Tee"), who is sold into slavery after he is orphaned in an attack on a caravan. Tee is bought by Baydool (David Warner), a beggar man who is secretly a spy for the Order of the Delta Knights. This underground society is dedicated to knowledge, justice, eradicating evil; the usual heroic stuff. Baydool makes Tee his apprentice as he covertly opposes the dastardly Lord Vultare (also David Warner), who is looking for the fabled Lost Storehouse of Archimedes, rumored to contain all manner of Lost Technology that would allow their wielder to Take Over the World.

The duo infiltrate Vultare's castle to gain access to a map leading to the storehouse, but afterward Baydool is captured, and Tee's attempt to rescue his mentor ends badly. Tee sets off to find the Storehouse before Vultare can, joining forces with Leonardo da Vinci, who is also a member of the Order, and a serving wench named Thena. Along the way they have a few scrapes with Vultare's forces, Leo hits on and gets hit by the girl, the party gets captured by a disturbingly merry band of masked bandits, and it turns out Thena is a princess.

In the end they find the Storehouse, but it turns out Vultare's been following them the whole time! Fortunately the villain gets Distracted by the Shiny artifacts and zaps himself to death, and Tee blows up the Storehouse, reasoning that mankind is not yet ready for its secrets. But Leonardo rips off most of the gadgets inside of it, so it isn't a total loss. The end.

As far as movies riffed on by Mystery Science Theater 3000 go, this one isn't one of the worst but also not one of the best. It's at least watchable and usually fairly fun, but also notably confusing and nebulous, especially with regards to its temporal and physical setting. The recap can be found here.

Also, several viewers have noticed that the first act of Delta Knights ("mute" orphan slave is bought for an insultingly low sum, freed, and adopted by a "crippled" beggar who is a spy for a secret organization) is essentially Robert A. Heinlein's Citizen of the Galaxy Recycled In Medieval Europe.

Quest Of The Delta Knights contains examples of:

I SEEEEE them! I'm CAAH-MIIIIING!