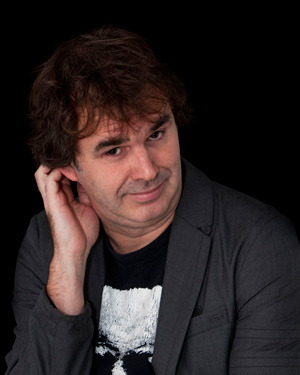 It is impossible to know a man's insanity until you learn more about them.
Advertisement:

Patrick Senécal (born October 20, 1967) is a horror/mystery/suspense author from Quebec, Canada. His first novel, 5150, rue des Ormes, was published in 1994. His career really took off with his third novel, Sur le seuil, which helped put his name on the list of renowned Quebec authors. So far, he has published sixteen books, with a new one on the way; co-wrote the scripts for three film adaptations of his stories; penned the script for a web series called La reine rouge (The Red Queen); and contributed to many short story collections.

His books tend to fall in one of two categories: Thriller, mystery or suspense stories that usually follow a realistic train of thought, with a detective solving a mystery or being on the hunt for a criminal; or supernatural horror stories with an edge of reality, with usually Denser and Wackier plots and greater amounts of Black Comedy. Senécal's characters range from writers to CEGEP teachers to detectives to psychiatrists to richer folks. Most of these protagonists also live in Drummondville, Patrick Senécal's hometown. The stories also tend to greatly emphasize the psychology of the characters, frequently causing or adding to the horrors.

In many reviews, Patrick Senécal has been compared to Stephen King. However, a quick look at both show that the Quebecer author's works tend to be much gorier and sexually explicit than the famous American author's. Patrick Senécal has also been known to use Canon Welding, much like King, though it's nowhere nearly as intricate (see below).

So far, the only Patrick Senécal book that has been translated to English is Contre Dieu (Against God). Two more will be available in 2019: Les sept jours du talion, now Seven Days, and 5150 rue des Ormes, now called 5150 Elm's Way.

A TV series was released in 2021 named "Patrick Senécal présente" ("Patrick Senécal Presents"), a 10-episode season following an anthology format with scripts written by him. The trailer can be seen here

Patrick Senécal's career and books contain examples of those tropes: