The Character Sheet for Aura Battler Dunbine. As it is a Tomino series, beware of unmarked spoilers!

The Crew As A Whole 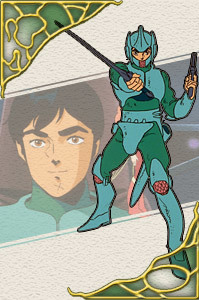 "I...want to rid Byston Well of all things tied to the Aura Machines. That's why I came back."

A motocross enthusiast who whilst riding his bike, is transported to the world of Byston Well. There he is enlisted into Drake's army though a chance encounter with Marvel Frozen of the Anti-Drake resistance causes him to fight his former lord. 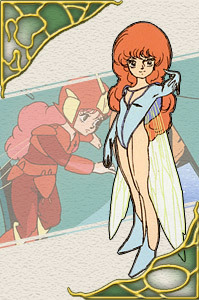 "Even if you love someone. You still might die without being loved once..."

A Mi Ferario that hangs around the Zelana after falling from the Ferario's dimension. Over time she bonds with the crew and decides to pull her weight by riding in Show's cockpit to assist him. 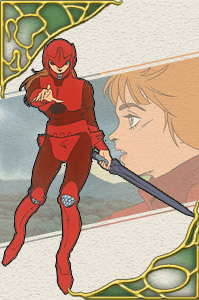 "All I see is a foolish man who serves Drake without thinking about the consequences!"

A young woman from Dallas and the only human from Upper Earth not summoned by Drake. She joins Nie's resistance force and convinces Show to oppose Drake. Initially has feelings for Nie, but over time falls in love with Show instead. 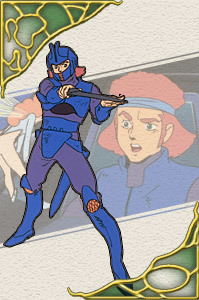 "I won't look down on myself anymore, from now on I'll keep fighting Drake until the very end."

The young heir to the House of Given. He serves his father faithfully in combatting Drake's forces but after Drake's Aura Battlers kill his parents he finds himself as the inexperienced new leader of the resistance. 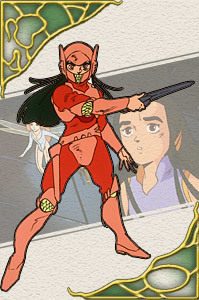 The heir to the House of Kiss which is allied with the Given family. Keen plays more of a support role, often backing up Show and company in the Fou, though she does upgrade to better Aura Machines late in the series. 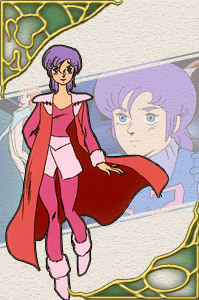 "The source of all this chaos...is you mother!"

The daughter of Drake but is staunchly opposed to his conquest of Byston Well. 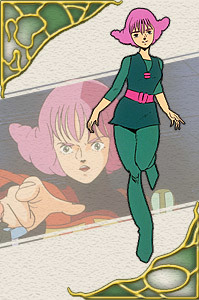 "Don't throw your lives away, it's irresponsible to die until after you've saved the world!"

The princess of the Kingdom of Mi and later the Queen of Rau. Elle was initially a non-combatant who wanted to understand the nature of Aura, but the increasing reach of the war drags her into a leadership position. 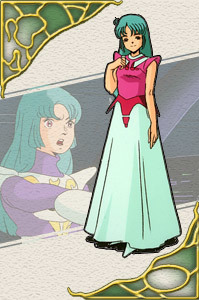 "The world of Byston Well, no the power of Aura itself will definitely repay us so long as the war ends. That is why we must fight until the end..."

The Queen of the Kingdom of Na. After Show proves his worth as an Aura Battler to her, she gifts him her country's secret weapon - the Billbine and becomes a powerful ally in the final arc. 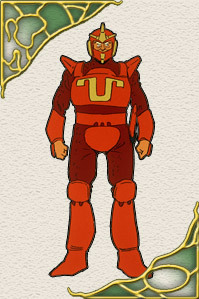 The King of Rau and grandfather to Elle. He is one of the first leaders to recognise the threat Drake poses and offers his aid to the Zelana crew.
Pilots: Bozune, Botune
Commands: Goraon
House of Luft 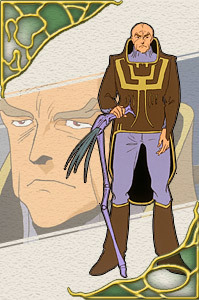 "Brave Soldiers, citizens who care for their country! The virtuous people of Ah must toil, but their lives do not get any easier, whose fault is that!? It is because King Fruaon is incompetant, we must once again put the Land of Ah into the hands of the Komon!"

A retainer for the King of Ah and patriarch of the House of Luft. Drake uses the captured Ae-Ferario Silkie to summon people from Upper-Earth to fight for him as "Aura Battlers" in his conquest to rule over all of Byston Well. 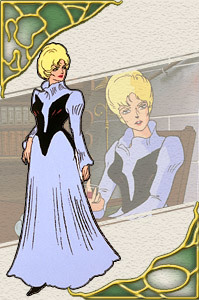 "Silly girl, did you really think a mother could not kill her daughter?"

The wife of Drake. On the surface she seems a loving spouse who supports her husband, but in reality she is a schemer who goes behind Drake's back by allying with his benefactor King Bishott so they can overthrow Drake and rule Byston Well themselves. 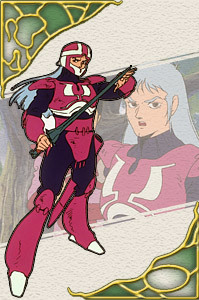 "Defeat followed by defeat, it all began when that man from Upper Earth arrived. I want to win, I want to defeat him! I am the descendant of knights!"

The commander of Drake's army. He leads the conquest for his lord and fights the Zelana crew on many occasions. But after several defeats is dropped from service. He resurfaces as the mysterious "Black Knight" whose sole objective is to defeat Show Zama to restore his honor. 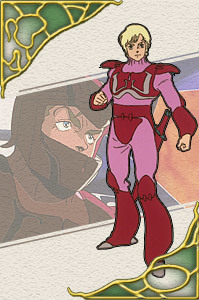 "When you return from a trip to Hell, you learn to be a bit more assertive..."

An air force pilot candidate from Boston who was part of the initial trio summoned to Byston Well. Initially he serves Drake but after a severe loss finds himself waking up from a coma in the Kingdom of Ku and becomes a Battler for Bishott instead. During the final arc, he joins up with Drake once again after America allies with the Drake forces. 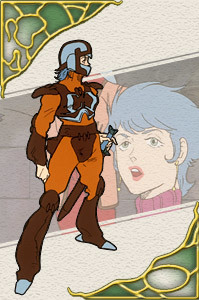 "Silky doesn't have much power. You won't be able to return home if you don't cooperate, Show Zama."

A knight in Bern's squadron. She joined Drake's forces to restore her family name after her parents died defecting from the country of Ah. 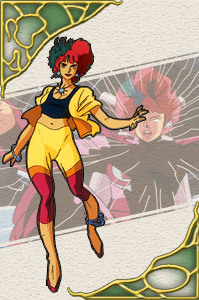 "If you look down on this "little girl" then you'll wind up dead!"

An indie musician from Dublin, Jeryl is part of the second trio of people summoned to Byston Well by Drake after losing both Show and Tokamk. Jeryl is temperamental and vindictive, serving to act as a mirror to emphasise what Show would have become if he continued to serve under Drake.

"This war, it looks more entertaining than playing video games at least."

Todd's senior in the American Air Force and part of the second trio of people summoned to Byston Well by Drake.

"If you could never find any work, you too would understand how great this world is!"

An out of work actor from China who is part of the second trio of people summoned to Byston Well by Drake. 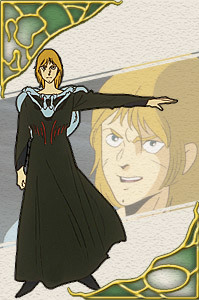 An engineer from California who upon coming to Byston Well allies with Drake and together with Zet creates the Aura Battlers in order to unify all of Byston Well under his new lord. Unbeknownst to others, Shot secretly harbors the desire to rule himself and manipulates several factions throughout the story.

"Die Show Zama, for the sake of Shot's ambition!"

A music teacher hired to tutor Riml. Shot Weapon notices she has hidden potential and trains her to become a Battler to restore her family's former aristocratic standing. 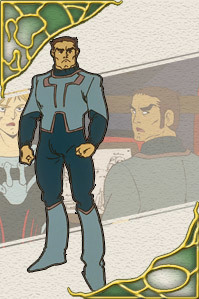 "Heh as expected, flying one yourself is way better than simply making them."

Like Shot, Zet is an American engineer and together they built the first Aura Machines in Byston Well. Mostly serves in the background fixing and upgrading Drake's machines. Upon returning to Upper Earth he by chance meets the Black Knight and together they become a pair of wandering mercenaries.

The King of the Kingdom of Ku who allies with Drake early on in the show. But unbeknownst to all, Bishott is plotting alongside Drake's wife Luuza in order to overthrow him as the Supreme Commander.

The Queen of all Ferario who resides in the Land of Water. The Zelana crew attempt to gain her assistance several times over the course of the series.

An Ae-Ferario who was captured by Drake and forced to summon Upper-Earthers to fight for him.

The protagonist of the OVA sequel. Shion is a young man from Baran-Baran. After being captured by Rabern, he and Reml escape with the help of the Mi-Ferario, Silky Mau. He pilots the Sirbine, a powerful Aura Battler, against Rabern's forces. He is in fact the reincarnation of Show Zama.

The Princess of Baran-Baran, Reml's family were tasked with the job of guarding the Sirbine. She is the reincarnation of Riml Luft.

The self-proclaimed "Black Knight" who rides the Aura Battler "Zwauth". He leads an army to conquest Byston Well. He is the reincarnation of Bern Bunnings.

A female warrior, she is a subordinate of Rabern. She's the reincarnation of Garalia Nyamhee.

A hermit who has lived alone in the north of Byston Well longer than anyone can remember. He created the Zwauth and inspires Rabern to become the Black Knight.