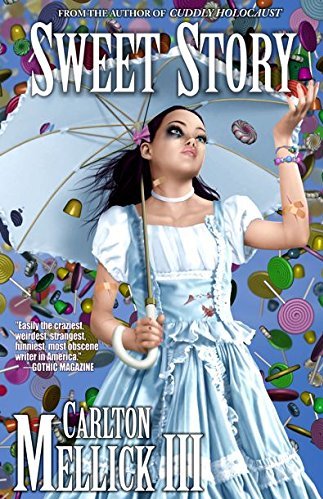 Sally always dreamed of finding the end of the rainbow so she could make a wish to the Leprechaun there, and then one day, her dream came true! All right, so it wasn't a leprechaun at the end of the rainbow, it was a fat, drunken rainbow pirate, but he did grant wishes. Being a Nice Girl, Sally wished for it to rain candy, so that all the children poorer than her could finally have their fill!

Except it turns out that a lollipop can do considerable damage when it hits a person after falling for several miles. The death toll is climbing. And then there's the fact that since it never rains water anymore, the whole world is literally drying out. A ruthless militia is taking over the town. People are now resorting to mass-cannibalism. And it turns out that you can get really tired of candy when it's the only thing there left to eat...

Never has there been a Sugar Apocalypse quite this literal!

Sweet Story is a work of Bizarro Fiction by Carlton Mellick III.

This novella contains examples of the following tropes: