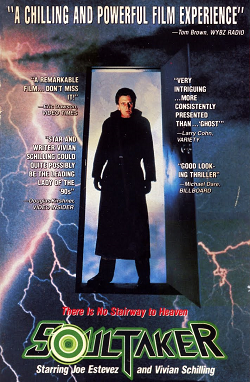 Soultaker is a 1990 fantasy film starring Vivian Schilling (who wrote the screenplay and co-wrote the original story), Joe Estevez and Robert Z'Dar. The story involves a group of teenagers - unaware that they were killed in a car crash (due to the carelessness of their coked up driver/good friend) - on the run from an angel of death. As they flee from "The Soultaker", he begins picking them off one-by-one and becomes infatuated with one of the teenagers, Natalie, who is the spitting image of his lover in a past life. The two remaining teens, Natalie and her ex-boyfriend Zach, attempt to reunite their souls with their hospitalized bodies before their parents decide to pull the plug.

The film has the dubious distinction of being featured on a tenth season episode of Mystery Science Theater 3000, featuring the guest returns of TV's Frank and Joel Robinson. However, it also won a Saturn Award in 1992 for Best Genre Video Release. All told, it's not that bad a movie, despite its low budget and obviously dated fashions. Doesn't mean there isn't plenty for Mike and the 'Bots to poke fun at, though.

Completely unrelated to the anime series with the same name.