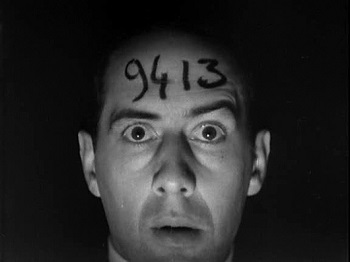 The Life and Death of 9413: a Hollywood Extra is a 1928 experimental short film directed by Robert Florey and Slavko Vorkapić. A guileless young man arrives in Hollywood hoping to be a movie actor. The executive that he talks to designates him 9413, writing the number on his forehead, and puts him to work as an extra. 9413 struggles to find work, and eventually dies. After he ascends to heaven, an angel wipes the number off of his forehead.

This weird little 13-minute short was made for a cost of $97. (Equivalent to $480 in 2014.) Florey got his friend Douglas Fairbanks to loan him some film negative and editing equipment. Florey would go on to a successful career as a film director, while Vorkapić had a similarly successful career as a film editor. And if that wasn't enough talent, the cameraman, credited only as "Gregg", was none other than Gregg Toland, one of the most famous cinematographers in history. Toland would go on to work with directors like Orson Welles and John Ford and do groundbreaking work in films like Citizen Kane and The Long Voyage Home.

The Life and Death of 9413 was inducted into the National Film Registry in 1997.