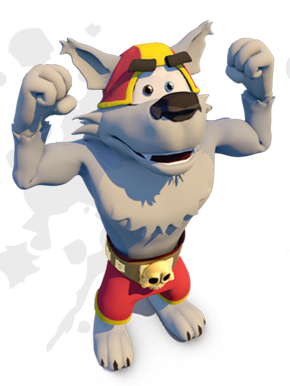 Classic platforming returns! Welcome home, platforming. Oh, look! You've brought your friends, questing and adventure! We made you a cake.
—Dorado, in the trailer.
Advertisement:

The Legend of el Lobodestroyo Vs. la Liga de los Villanos (Lobodestroyo for short) is an upcoming 3D Platform Game by Left Handed Games Studios, which was funded

on Kickstarter in December 2013, and is slated for release on macOS, PC, Useful Notes/Linux, OUYA, and all three eighth generation consoles. Like A Hat in Time, a similar Kickstarter-funded video game, Lobodestroyo seeks to revive the 3D "collectathon" genre, but this game is more specifically an homage to Rare games of the late nineties and early noughties, especially Banjo-Kazooie.

Set in Costa Lucha, a Latin American-inspired country inhabited by Funny Animals, the plot concerns Mutt, the runt of the litter in a pack of crime-fighting luchador wolves led by the legendary vigilante, El Lobodestroyo. One morning, Mutt awakens to find that the rest of the pack has been kidnapped, and El Lobodestroyo's mask and belt are strewn on the floor of their lair. Eager to prove himself a hero, Mutt decides to adopt El Lobodestroyo's identity (aided by Dorado, a sarcastic spirit that lives in the champ's belt), rescue his friends, and bring the perpetrator to justice.

Check out the official site here,

for an interview with the game's creators.